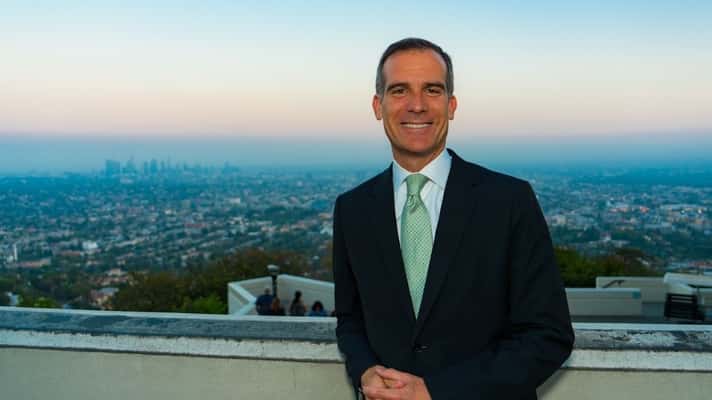 ” Los Angeles Mayor Eric Garcetti said, “I want to announce new changes” to the restrictions put in place to prevent the spread of COVID-19.

The mayor announced, as of tomorrow, the city will “allow all retail businesses” to let customers inside their stores so long as those businesses abide by COVID prevention best practices, which includes allowing only 50 percent of capacity.

The ruling will also allow drive-in movies and houses of worship to reopen. It applies not just to L.A. city, but also to the county, as the guidelines were also approved on Tuesday  May 26th, by the Board of Supervisors.

The changes set the stage for the county to request a variance from the state to permit swifter reopening of other sectors.

The reprieve does not include nail shops, salons or restaurants for dine in. Garcetti said the county is applying to the state for a variance for those businesses and that the process should take “a few days.”

The reopening does, however, include one of Hollywood’s favorite hiking spots.

“Runyon Canyon is open,” said the mayor, before noting that there will be “counters” at the entrance to make sure Runyon doesn’t get too crowded. Also, traffic on the loop trail will only be allowed in one direction to aid social distancing.

“Enjoy it, it’s back,” declared Garcetti. “It’s one of the greatest places in L.A.”

Ironically, on the same day that Garcetti made his announcement, the Los Angeles County Department of Public Health confirmed 27 new deaths and 1,843 new cases of coronavirus. That’s the biggest spike in new cases reported in a single day. The county public health department, however, was quick to point out that some of these cases are from a backlog of test results.

Garcetti attributed the spike to the “compression of cases” over the long weekend. He said the average was now about 1,200 new cases a day.

Most every recent week has seen an increase in test results by Tuesday or Wednesday as a bottleneck of results loosens up, but no spike has been as large as Tuesday’s.

For comparison, the county confirmed 1,072 new cases on Friday.

Dr. Deborah Birx, the White House’s coronavirus response coordinator, identified Los Angeles and two other major metro areas on Friday as places of concern because they have a “persistent high number of cases”

“As I noted yesterday,” Ferrer told reporters on Friday, “our overall data points are looking pretty good in terms of being on the recovery journey.”

Ferrer said that hospitalization rates and deaths were moving downward. “We are moving in the right direction,” she said.