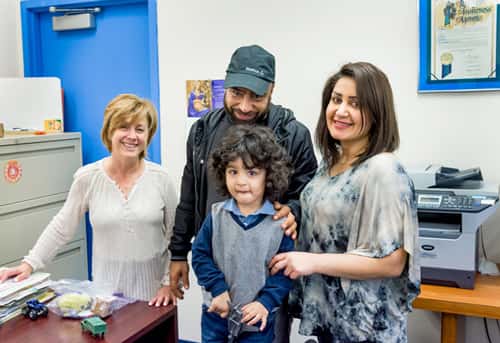 As Catholic Charities celebrates 100 Years of Providing Help and Creating Hope for the poor and vulnerable in the three-county area of Los Angeles, Ventura and Santa Barbara, it is appropriate to reflect on the birth and growth of the agency.

The various Catholic charitable groups that were providing services throughout the city of Los Angeles were formally organized by Most Rev. John J. Cantwell, Bishop of the Diocese of Monterey and Los Angeles, as the Associated Catholic Charities in 1919.

It became the Bureau of Catholic Charities in 1921 and linked all Catholic activities with State, County and City departments, institutions and agencies. The organization was named the Catholic Welfare Bureau of the Diocese of Los Angeles-San Diego in 1926 when Monterey and Fresno split off to form a Diocese.

In 1936, the Diocese of Los Angeles-San Diego was formally elevated to become the Archdiocese of Los Angles, and San Diego became a separate Diocese. The Catholic Welfare Bureau was incorporated in the State of California in 1937. Among the member agencies were Catholic Youth Organization (CYO) and Confraternity of Christian Doctrine (CCD).

Catholic Charities is committed to manifesting Christ’s spirit by collaborating with diverse communities, providing services to the poor and vulnerable, promoting human dignity, and advocating for social justice.

Through the power of the Holy Spirit, Catholic Charities of Los Angeles commits to serve the vulnerable and to strive for a just society.

Services are structured to assist newly-arrived immigrants in learning English, obtaining education, navigating legal matters and training for jobs that will provide, at least, a living wage.  American social norms are taught as well. These programs have a proven track record of helping immigrants transition and contribute to society.