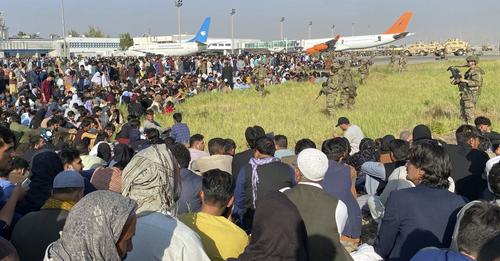 Students and affiliates of the American University of Afghanistan attempting to leave the country were unable to do so after school officials informed them civilian evacuations at Hamid Karzai International Airport would end on Monday.

The university is composed of English educators, many from America , with the goal of teaching Afghan students within the country. Current and former students of AUAF congregated at a safe house on Sunday and rode buses to the airport, waiting seven hours for clearance before facing rejection from airport clearance officials, according to a report from the New York Times.

“I regret to inform you that the high command at HKIA in the airport has announced there will be no more rescue flights,” the AUAF officials told roughly 600 students in an email, according to the outlet. The student group was also informed the university gave out their names to the Taliban presently operating checkpoints surrounding the airport, an action that left many alumni and students distressed.

“We are all terrified. There is no evacuation. There is no getting out,” a 24-year-old sophomore at AUAF told the New York Times.

The blockage comes as the United States prepares to meet a deadline to remove armed forces from the country by Aug. 31, as military units have helped facilitate the largest airlift evacuation in history. It also follows the event of a suicide bomber who detonated explosives near the airport last week, killing 13 U.S. service members and dozens of Afghan civilians.

AUAF President Ian Bickford left the campus when it was shuttered after the Taliban took Kabul, along with other foreign staff members. Bickford said he is working with the State Department to ensure the evacuation of over a thousand current and former students.

The university opened in 2006 and gained most of its funding from the U.S. Agency for International Development, providing it with $160 million, making it one of the agency’s largest civilian projects in the country.

The State Department announced on Sunday an arrangement with the Taliban, in conjunction with 97 other countries, to allow evacuations of Afghan allies after the deadline.

“We are all committed to ensuring that our citizens, nationals and residents, employees, Afghans who have worked with us and those who are at risk can continue to travel freely to destinations outside Afghanistan,” the joint statement said.

Since the end of July, the U.S. has relocated approximately 122,300 people from Afghanistan. Roughly 116,700 people have been evacuated since Aug. 14, the day before the Taliban took over Kabul.

Foreign ministers from several countries, including Canada, France, and Germany, will meet virtually on Monday to discuss the next steps for Afghanistan following Tuesday’s withdrawal deadline, the State Department said Sunday.

“The participants will discuss an aligned approach for the days and weeks ahead,” the statement said.