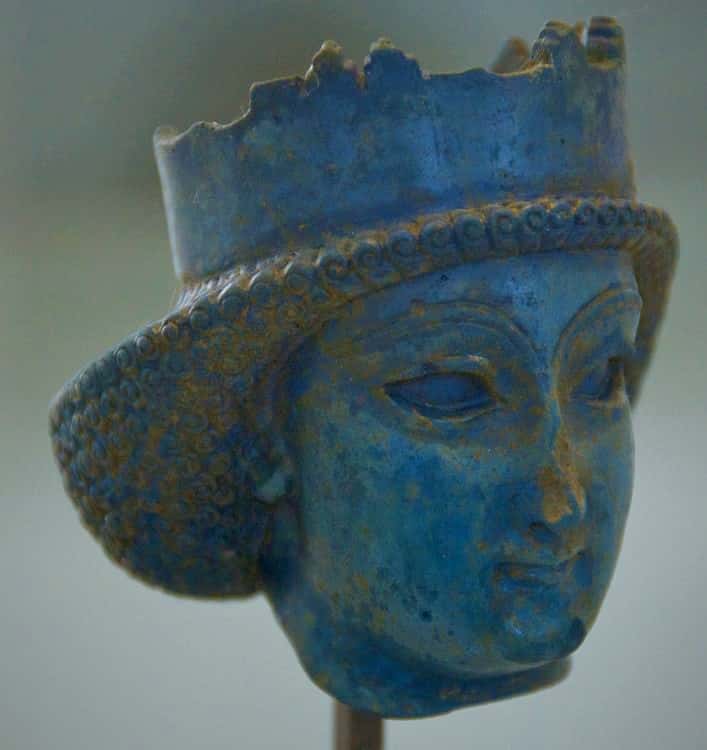 The daughter of Cyrus the Great, wife of Cambyses II, Bardia (also known as Smerdis, r. 522 BCE), and Darius I (the Great, r. 522-486 BCE). Atusa is better known as Atossa, the name she appears under in Herodotus, and was considered a great prize as a wife since she was the daughter of Cyrus and Cassandane. Herodotus (in Book III.133) relates the story of Atossa finding a painful growth on her breast and enlisting the aid of the Greek physician (and slave to Darius I) Democedes to cure her (the first recorded case of mastitis in history). This part of Herodotus’ narrative is accepted by scholars without challenge but it continues with a tale universally rejected as anything close to truth: the story of how Democedes only cured Atossa on the condition that she talk Darius I into sending him as an advance scout back to his homeland in preparation for Darius I’s invasion in 490 BCE and Atossa suggesting the invasion in the first place in order to bring back more Greek slaves of the quality of Democedes. Democedes is sent to scout, cleverly tricks his Persian guards, and escapes (III.134-137). This is one of the most often-repeated stories concerning Queen Atossa in western sources but, in the Persian tradition, this tale is dismissed, and she is known as a strong, independent woman, wife of three kings and mother of Xerxes I, who operated her own business and maintained her own court and military. [Source: Ancient.eu]
ATOSSA, Achaemenid queen. The Greek form of the name may reflect Old Pers. *Utauθa ( = Av. Hutaosā), possibly “well trickling” or “well granting” (see M. Mayrhofer, Iranisches Personennamenbuch I, Vienna, 1979, p. I/52, no. 179). The most famous bearer of this name was the daughter of Cyrus the Great—probably his eldest; her mother may have been Cassandane. Atossa lived ca. 550-475 B.C.; Aeschylus’ Persae would indicate that she was still alive when Xerxes invaded Greece. (The fact that her name is not found in the Persepolis fortification tablets certainly does not prove that she was dead at that time as suggested by W. Hinz, Orientalia, N.S. 39, 1970, p. 423.) Atossa was consort to her brother Cambyses II; and, after his death, she somehow passed into the harem of Gaumāta (the Pseudo-Smerdis). Eventually Darius took possession of the harem, married Atossa, and made her his main consort and queen (Herodotus 3.88.2). A prominent motive may have been Darius’ wish to legitimize the accession of his own collateral Achaemenid line by joining with a member of Cyrus’ family. Atossa, according to an anecdote of Herodotus (3.134.1-6), induced Darius to make war on the Greeks, because she wanted to have Attic, Argive, and Corinthian maidservants (see also Aelian, NaturaAnimalium 11.27). At her instigation a Persian expedition reconnoitered the Greek coasts and surveyed Greek naval power. It was guided by Democedes of Croton, her own and Darius’ private physician. (He had treated Darius successfully for a dislocated ankle and Atossa for a breast tumor; Herodotus 3.129.1-130.4, 3.133.1). Although the expedition was successful, Democedes took the opportunity to escape (Herodotus 3.134-138, Timaeus apud Athenaeus 3.152.10ff.).
Atossa had four sons by Darius (Herodotus 7.7.2). Xerxes was the eldest; the others were Hystaspes, leader of the Bactrian and Saka troops in Xerxes’ army, Masistes, one of Xerxes’ commanding generals, and Achaemenes, admiral of the Egyptian fleet (Herodotus 7.3.2, 7.64.2, 7.82, 7.97). Because of her lineage and by her intelligence, Atossa exercised great influence on her husband and at court generally. Ca. 487, in a harem struggle, she won Darius’ support for the succession of Xerxes. Xerxes was the first son born to Darius after his seizure of the kingship, but not the eldest of all. Darius had three sons by his first wife, the daughter of Gobryas (Herodotus 7.2.2). Xerxes’ appointment as commander-in-chief of the Persian army was made to strengthen his position as prospective successor (Herodotus 7.2.1-3.4; Plutarch, De fraterno amore 18). The smooth transition to Xerxes’ rule after Darius’ death must have been due in part to Atossa’s great authority. During her son’s reign she held the high status of queen-mother. Her reputation is clearly reflected in Aeschylus’ Persae, where her dignified figure is at the heart of the play’s action (lines 159ff., 290ff., 598ff., 703.). Her personality is impressively represented and drawn with esteem; Darius, called up from Hades by the chorus, explicitly approves of her influence over her son (lines 832ff.).
The name Atossa was apparently a traditional one in the Achaemenid clan. According to the genealogy of the kings of Cappadocia, it was borne by a sister of Cambyses I (Diodorus Siculus 31.19.1). A sister and wife of Artaxerxes II was also so named (Plutarch, Life of Artaxerxes 23.26f.).
Bibliography:
See also Justi, Namenbuch, p. 50.
F. Cauer, “Atossa,” Pauly-Wissowa, II/2, col. 2133.
E. Kornemann, Grosse Frauen des Altertums, Wiesbaden, 1952 (4th ed.).
Search terms:
اتوسا atoosaatosaatusa
(R. Schmitt)
Originally Published: December 15, 1987
Last Updated: August 17, 2011
This article is available in print.
Vol. III, Fasc. 1, pp. 13-14 [Source: Encyclopedia Iranica]
Previous Post
Next Posts