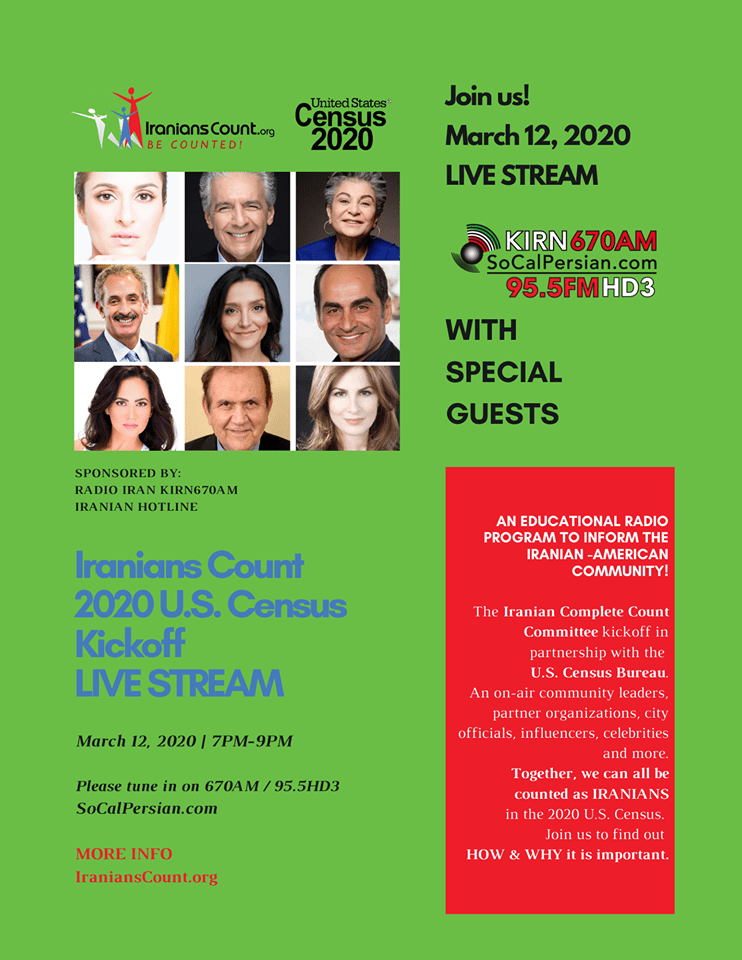 Please join us either on 670AM or 95.5HD or online via SoCalPersian.com
An educational radio program to INFORM the Iranian -AMERICAN COMMUNITY!
The Iranian Complete Count Committee kickoff event in partnership with the U.S. Census Bureau. A live stream of community leaders, partner organizations, city officials, influencers, celebrities and more. Together, we can all be counted as IRANIANS in the 2020 U.S. Census.
Join us to find out HOW & WHY it is important.
Special guest speakers: (alphabetical order)
Faramarz Aslani, Mike Feuer – LA City Attorney , Rudi Bakhtiar, Tara Grammy, Sasan Kamali, Rana Mansour, Bita Milanian, Navid Negahban & Homa Sarshar
More info at iranianscount.org | Follow @iranianscount on Instagram / Twitter / Facebook
Sponsored by Radio Iran KIRN 670 AM & IranianHotline.com
10 minutes of your time will determine benefits for YOU and OUR community for the next 10 YEARS and beyond.Participate in the 2020 U.S. Census kicking off this MARCH 12 and shape your future and the future of the IRANIAN community. The number of #IranianAmericans has historically been underrepresented in U.S. Census data. The underrepresentation can be attributed to the lack of participation in the census surveys.According to the U.S. Census Bureau, a total of roughly 300,000 individuals identified themselves as Iranian or Iranian-American, in the 2010 Census. However, the actual number is believed to be way more than that.
QUESTION # 9 | RACE QUESTION
How should you respond to the “#Race” question #9?
If you would like to be counted as an #Iranian, in your response to question number 9 mark [X] any single Race box that you most identify with, and make sure you write-in “IRANIAN” in the text-box below it.
#IraniansCount #2020Census