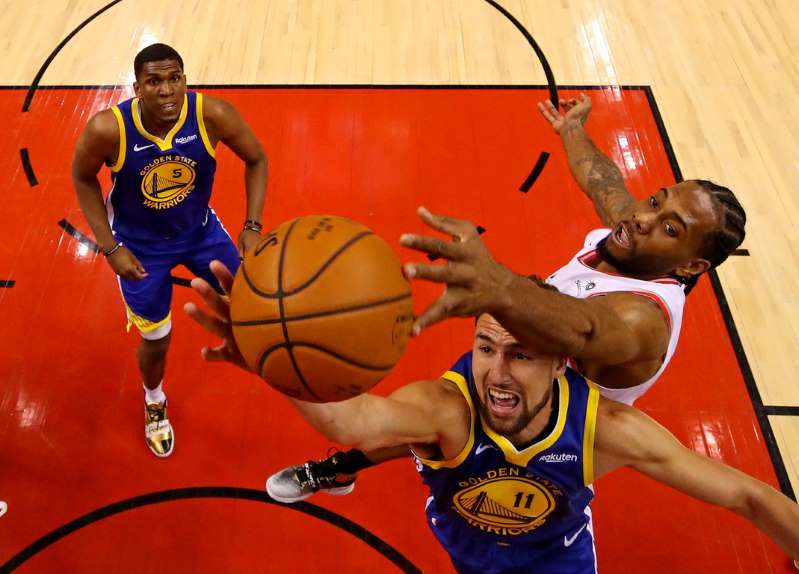 TORONTO — The latest antics of Drake, thankfully, were mostly overlooked Sunday night in the intensity of Game 2 between the Warriors and the Raptors.

But the look-at-me recording artist and Raptors fanatic took his Warriors trolling to another strange level. Drake wore a black hoodie, with a picture of child actor Macaulay Culkin on the back above the word “Kevin?!?!?!?!” It was a play on Culkin’s “Home Alone” character, young Kevin McCallister, who was left behind by his family; it was also an odd dig at Kevin Durant.

The implication: Where are you, Kevin Durant? When will we see you?

The likely answer: in Oakland, sometime this week.

No one ever thought that winning a third straight NBA championship was going to be an easy task for the Warriors. But the Toronto Raptors, who won Game 1 and required a grueling, gritty performance for the Warriors to eke out victory in Game 2, are a more daunting opponent than many expected.

This Warriors team is lunging toward the finish line, but is depleted, limping, dehydrated, stumbling. The team still has championship blood in its veins, still can tap into a deep well of experience and confidence to push forward. But the final thrust for the end might be the hardest.

They need Durant. Not at some theoretical future date. This week.

Head coach Steve Kerr said over the weekend that it was feasible that Durant could return after only one real practice with the team. The Warriors, who flew home after Sunday night’s game, had no activities scheduled Monday, but they will have a full practice Tuesday. And then they host Game 3 on Wednesday, exactly four weeks from the day that Durant suffered his calf strain.

Though Yahoo Sports reported that Durant could be pointed toward a return in Game 4, there’s increased speculation that he could be back for Game 3.

If iron man Thompson (left hamstring) is ruled out, that could be a reason to accelerate the timeline. Without Thompson on the floor in the fourth quarter Sunday, the Raptors harassed Stephen Curry and held him scoreless. A full game without Thompson or Durant would give the Raptors defensive options and flexibility, and they would focus all their efforts on stopping Curry.

This is now a best-of-five series and the Warriors have games to work with; there will be no sense of desperation. The team is not going to rush Durant back, but if he’s close to ready, there’s no reason to hold him.

He might not be the all-universe player he was while carving up opponents in April and early May. But 75 percent of Durant is better than 100 percent of most players.

The Raptors must think that they missed an opportunity, not being able to close out Game 2, when both Thompson and Looney (fractured cartilage in his chest) were missing, Iguodala was clearly hurting, Curry wasn’t feeling well, and Durant was inside the locker room, watching on television. There have been few moments when the champions have been as vulnerable.

“We went into it expecting a dogfight,” Toronto guard Fred VanVleet said. “Yes, we won Game 1, but I think everybody else outside of our locker room was a lot more excited than we were.

“We understand what this team brings and what type of effort it’s going to take to beat these guys.”