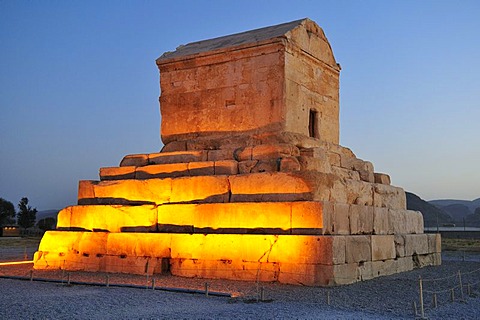 Cyrus’ empire is the first known multiethnic, multicultural, multilingual and multireligious state. Wisely, he respected local cultural, religious and administrative practices, which gained him considerable support from the subjects of his vast domain.

Little is known about the parentage or youth of Cyrus II or Cyrus the Great (in Persian, Kurush). He burst onto the scene somewhere between 553 B.C. and 550 B.C. when he overthrew the Empire of the Medes, seizing its capital city of Ecbatana, capturing its ruler, Astyages, and becoming the first king of the Achaemenid Empire.

Somewhat surprisingly by ancient standards, Cyrus spared the life of Astyages, married his daughter, and, some sources say, even adopted the deposed king as a father.

Soon thereafter, Cyrus founded the city of Pasargadae on the site of one of his most significant battles. Pasargadae served as ceremonial capital of the early Achaemenid Empire — it was never actually designed for a large residential population — until later in the sixth century B.C., when Cyrus’ successor Darius built the city of Persepolis, about 50 miles away. Today, both are Iranian UNESCO World Heritage Sites.

On the same day, Cyrus the Great, after opening the city gate, entered the great, glorious, and ancient city of Babylon. The people of Babylon thought that they would now be faced with plunder and slaughter and extortion of their lives and property, but Cyrus the Great and his troops did not do so. Instead, a royal decree was created that eliminated racial and ethnic discrimination and recognized freedom of religions and also the choice of residence. This cylindrical cuneiform inscription has been regarded by the United Nations (in 1971), as the first human right charter ever established in the world by Cyrus.

The Cyrus Cylinder written after defeating Nabonidus and conquering Babylon, is a valuable historical document. In the year 1971, the United Nations published the Cyrus Cylinder text in all the official languages of the United Nations members, and put its replica in the UN headquarters in New York City. The original cylinder is kept in British Museum

Every year on October 29th, Iranian people try to symbolically celebrate the day of Cyrus at the place of Cyrus’ Tomb which is located in Pasargadae in Fars province.>> Read more about Pasargadae

Brief biography of Cyrus the Great

According to Herodotus, Cyrus had a royal lineage. Greek historians, with exception of Ctesias, reported Mandana -the daughter of Astyages (median king)- as Cyrus’ mother. Some modern-day historians believe this narrative to be authentic, but others believe it to have had political origins, with the aim to reconcile the Medes with the Persian rule.

Cyrus first rebelled against King of Media and then stormed the capital of the Median state in Ecbatana and conquered this prosperous city with the help of the Mede Corps. Then defeated Croesus King of Lydia and sailed to Sardis, and after two weeks, the city of Sardis was occupied by Iranian forces. Cyrus entrusted the command of the conquest of the other cities of Asia Minor to his commanders and returned to Hegmataneh and then headed towards Parthia, Zarangiana, Herat, Khwarazm, Bakteria, Sogdia, and Gandehar. The details of these battles are not recorded in history and little is known about the quality of these wars. In the spring of 539 BC, Cyrus started the Babylonian conquest and entered the city of Babylon without any bloodshed. According to historical documents and researchers, the conquest of Babylon happened without any battle and was carried out by one of Cyrus’ commanders in chief named Geubruh on New Year’s Eve. Seventeen days after the fall of Babylon, Cyrus himself entered the capital on October 29th, 539 BC. The Babylonian occupation was a turning point in balancing the super powers that ruled Western Asia and also paved the way for the return of exiled Jews to their homeland in Israel. Cyrus also ordered the rebuilding of the Temple of Jerusalem and handed over to the Jews the vessels of gold and silver that Nebuchadnezzar II had looted from Jerusalem.

How did Cyrus the Great die?

Herodotus reports that Cyrus was killed in the war with the Masagets, but this view is rejected by most modern historians, who believe that Herodotus’ story is fabricated. The only authentic ancient source that indirectly refers to the death of Cyrus is the two clay tablets found in Babylon, the first of which dates back to August 12th, 530 BC, which dates to “the ninth year of Cyrus the King of Nations”. The second document, dated August 31st , 530 BC, is entitled “The Year of the Beginning of the Cambyses Rule, King of Nations”. These two documents, which seem to be of little importance, actually show that Cyrus died (or killed) between August 12th and August 31st, or at least, the news of his death and that of Cambyses settlement arrived in Babylon on this date.