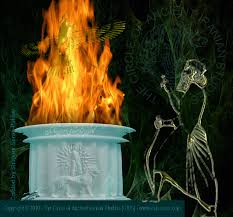 BY AVIJAH SCARBROUGH ORANGE COUNTY
PUBLISHED 2:03 PM ET FEB. 25, 2020
ORANGE COUNTY, Calif. — It’s a religion that’s been around since before Islam and Christianity, and it’s still being practiced today in Southern California.

For members of the Zoroastrian faith fire is a symbol of light and purity. You may not know that you’re familiar with the world’s oldest monotheistic religion, but a church elder who goes by Dr. Arde says chances are, you’ve been influenced by ancient Zoroastrian wisdom because it’s so universal.

“It’s based on good words, good thoughts and good deeds,” said Dr. Arde. “Who can say this is anything less than modern?”

Dr Arde says he’s seen a recent spike in young people’s interest in the religion, and their Persian heritage. The young members of the temple agree.

Dr. Arde says that during times of political unease many Iranians turn to Zoroastrianism to gain a sense of identity and to feel anchored.

“Unfortunately for the Iranian population today, in order to feel proud of themselves, they have to look back to about 1,400 years ago,” said Dr. Arde.

But Dr. Arde says many recent converts feel like they have to maintain secrecy so he won’t reveal too much about them.

“We keep that to ourselves, but there’s a tremendous resurgence in the younger population right now,” Dr. Arde said.

It was once the dominant religion of Iran back when it was called the Persian Empire, but after the Arab Invasion in 600 AD their numbers declined from 50 million to less than 200,000 because of persecution, something still fresh in their minds.

Southern California is home to the some of largest groups of Zoroastrians, with temples in Orange County and Los Angeles. They teach peace, equality, and personal freedom – something that resonates with the young people we spoke to.

“My favorite thing is that there’s a choice in everything you do,” said Bastani. “It allows you to think.”

And with the latest events in Iran, Dr. Arde says he turns to his faith in times of darkness in order to spread the light.

“It’s not just individual happiness, it has to be radiant happiness,” said Dr. Arde. “It’s called ushta. You have to light up other people.”

As the famous Persian poem says, a candle loses nothing by lighting others.

Please watch the below video: