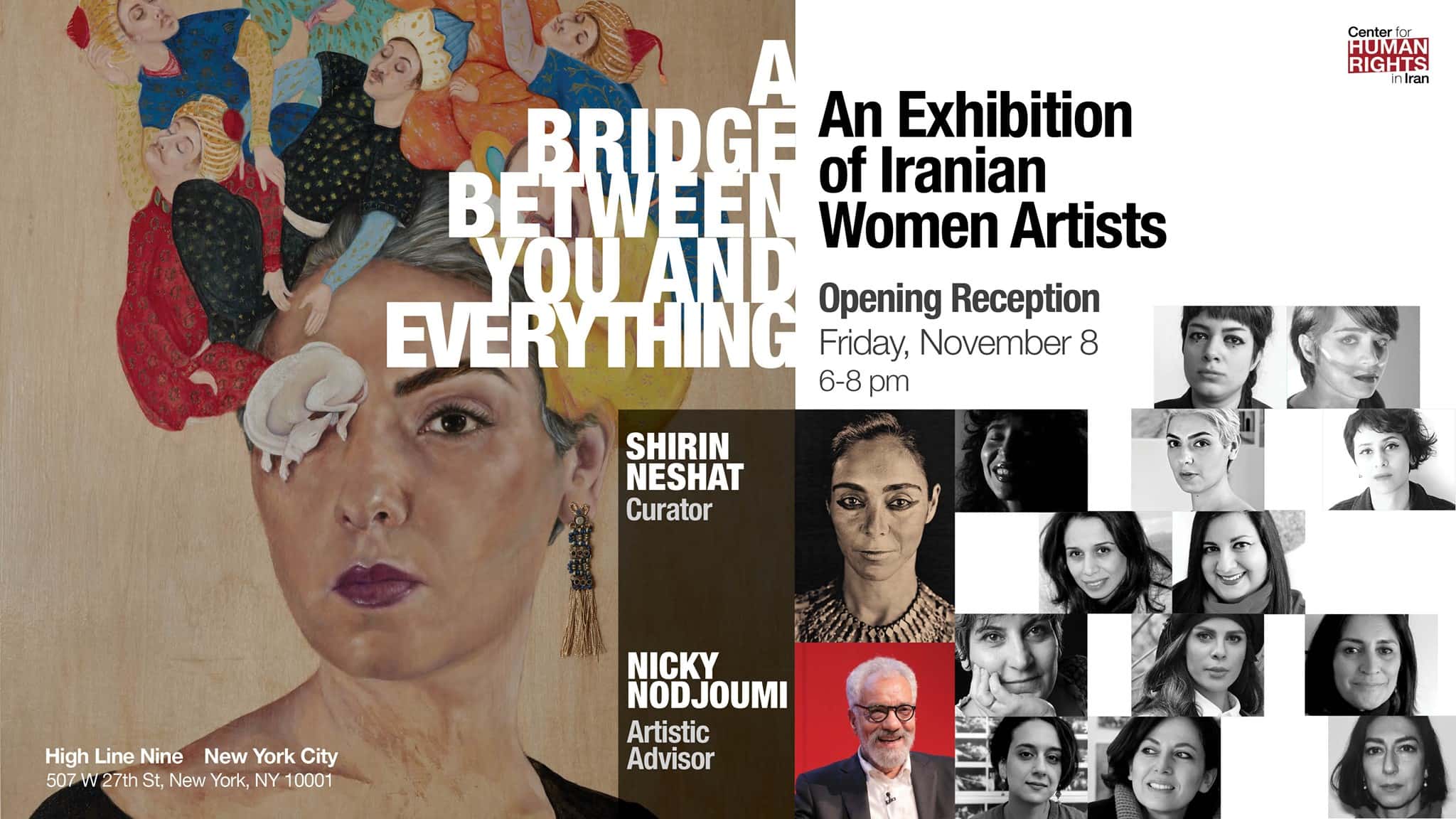 Join the Center for Human Rights in Iran

A Bridge Between You and Everything

Join the Center for Human Rights in Iran at their upcoming exhibition of 13 contemporary Iranian women artists in New York City, curated by the internationally acclaimed artist Shirin Neshat.

The show, “A Bridge Between You and Everything” features nearly 100 works—paintings, drawings, sculpture, photography and video—by both established and emerging artists, who began working after Iran’s 1979 Islamic Revolution. The exhibition is organized by the Center.

“At a time when the Western world is shining a spotlight on women’s issues and equality, it’s vital that we use this moment of the public imagination to empower dialogues from women and immigrant artists who have, and likely still continue to experience forms of repression, both in the extreme and every day,” curator Shirin Neshat said.

“This exhibit showcases the richness of contemporary Iranian art and the ability of these women to communicate vital and universal themes of identity and gender through their artistic vision,” added Hadi Ghaemi, executive director of the Center for Human Rights in Iran.

Curator Shirin Neshat is an Iranian-born artist, photographer and filmmaker who lives and works in New York. Exploring issues of nostalgia, displacement and gender politics, she has been the recipient of the Praemium Imperiale (2017), the World Economic Forum’s Crystal Award (2014), the Silver Lion for best director at the 66th Venice Film Festival (2009), the Hiroshima Freedom Prize (2005) and the Golden Lion Award—the First International Prize at the 48th Venice Biennale (1999). Her work has been featured in exhibitions at The Whitney Museum of American Art, The Museum of Modern Art and the Guggenheim Museum in New York, as well as many other prominent museums and galleries worldwide.

“Many of the artists have led a nomadic life and so their work merges Eastern and Western imagery and ideologies and many portray a resolved or unresolved relationship to their native country and to their host country…almost all look at sexual identity, repression, religion and memory,” said Neshat.

Nicky Nodjoumi, a prominent Iranian-born, New York-based artist, is artistic advisor for the exhibit. He has been instrumental in guiding the Center’s art initiatives, and served as curator for its 2017 exhibit Beyond the Ban. His paintings are in prominent collections worldwide, such as the Metropolitan Museum of Art in New York, the British Museum in London and the Guggenheim Museum in Abu Dhabi.

A full-color catalogue featuring the work of the artists, a forward by Shirin Neshat and extended excerpts from an intimate conversation between Ms. Neshat and the show’s artists will be available for sale at the exhibition.

The Center’s opening night launch event is on November 8 from 6-8pm, when attendees can view the pieces and meet the artists (first come, first serve). The exhibit is accessible at the High Line Nine gallery in Chelsea, New York from November 7-24.

Partial proceeds from the sales of art from A Bridge Between You and Everything will benefit the Center’s Arts and Culture program, which seeks to promote artistic freedom and cross-cultural understanding, and its Disabilities Rights program.

The Center for Human Rights in Iran (CHRI) is an independent, nonpartisan, nonprofit organization dedicated to the protection and promotion of human rights in Iran. CHRI investigates and documents rights violations occurring throughout Iran, relying on first-hand accounts to expose abuses that would otherwise go unreported. They bring these violations to the attention of the international community through news articles, briefings, in-depth reports, podcasts, and videos, and work to build support for human rights inside Iran as well. CHRI engages in intensive outreach and international advocacy aimed at defending the fundamental rights and freedoms of the Iranian people and holding the Iranian government accountable to its human rights obligations.